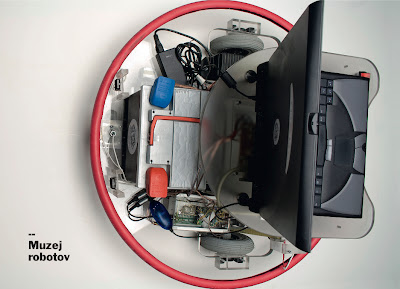 Opening: Thursday, 29 September 2011 at 19:00 in RSR with performance Fire Painting by Sanela Jahić

The exhibition Robot Museum includes fields such as interactivity, robotics, informatics and multimedia. It’s the first comprehensive exhibition of this part of contemporary Slovenian art. The project involves exploration, production and exhibition of robots and their cultural content, as well as software-art, intermedia installations and performance. The word robot means a machine controlled by computer and programmed to move or perform specific tasks. This universal term was first used by Czech writer Karel Čapek (suggested by his brother Josef Čapek) in his play R.U.R (Rossum’s Universal Robots, 1920). In industry robots perform repetitive tasks or carry heavy loads. Some are designed to work in dangerous situations or they explore space and sea depths. They are equipped with sensors or video cameras and are even programmed to make decisions.

Until recently Slovenia hasn’t devoted much attention to robots and their contextualization in fine arts. This exhibition is based on previous researches and theoretical placements, and presents a transition from kinetic to cybernetic art. It will also raise questions about placement of robots as new media products in the field of arts. At the same time it will establish a bridge between science and art which are subjects of separate disciplines, but in the case of robots they represent an indispensable link.

With this project Maribor Art Gallery and MKC Maribor would like to present phenomena of robots in the arts and culture. The exhibition aims to encourage connection and dialogue between technical culture, its development and artwork, while developing innovative transfer of knowledge and skills. 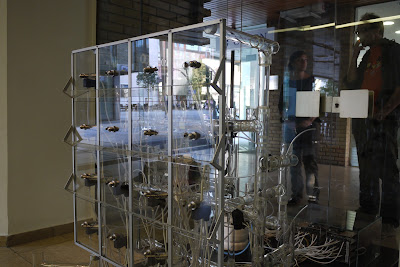 22.10.11  GUIDED TOUR / ROBOT MUSEUM: "Along with the guided tour, Sanela Jahić will execute the performance Fire Painting (2010). It is a cybernetic construction, which is composed of a set of 16 pumps creating pressure and pushing a lavish green colour kerosene oil mixture through the nozzles when the valves are released. The kerosene is sparked to combustion creating a formidable brilliant flame. The combustion is controlled by subtle movements of the sensor glove worn by the artist. She is literary playing with fire. The idea is built on a paradox of tactile handling of this primal element, using it as colour on a canvas like an action painter. She controls the image yet it constantly alludes her. Fire is the ultimate intangible and unstable light-based medium therefore any digital or electronic image can be emulated in its light (screens, projectors, televisions). There is no more frame, no more edge, just endless folds of infinite becoming of the image."
Posted by Sanela Jahic at 5:17 AM No comments:

"Passengers from the Relative to the Absolute", Publication Studio and Appendix Project Space, Portland, OR

Portland, Oregon. They say young people come to retire here. This summer a close friend of mine, David Knowles, invited me to come to Portland for what panned out to be a working vacation. David is the art director and print designer at Publication Studio, a laboratory "maker of special, constructed-one-at-a-time-by-hand books sold all over the world" with great philosophy on publication: "What PS makes a lot of, what we are growing, is "publics," not print-runs. Publication is the creation of a public. A public is strangers who have found common ground. It might be a public square or a community garden or a book - public space is any place where all are welcome and all who arrive have equal claim. For us, that's the space of literature. We make books as a kind of public space; and we extend that space into a digital commons (all our books can be read free and annotated online); we also host the social life of books."[1]  David designed and put together a really nice book about my work. The book is entitled Passengers from the Absolute to the Relative. From the Publication Studio site: Sanela Jahić, an emerging Slovenian artist, has documented her work in Passengers from the Absolute to the Relative and discusses the boundaries and dynamics of contemporary painting practices in relation to her mechanical image-making machines. This publication encompasses a broad survey of Jahić's work with machines, mirrors and masks and features essays by Urška Jurman, Ida Hiršenfelder and Alen Ožbolt. Passengers from the Absolute to the Relative is going to go to the NY Art Book Fair, a copy of it was sold to MoMA and there is even one on the shelf at Yale University! (You can check some of David's other design work and activities here & here.) 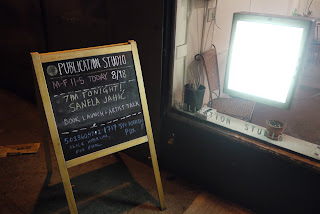 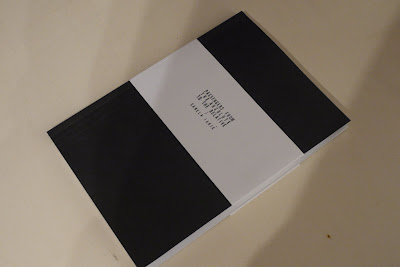 The book was published on the occasion of my first exhibition in the United States at Portland's Appendix Project Space. David got me into contact with Zachary Davis and Travis Fitzgerald, who, together with Joshua Pavlacky, are the co-curators of this venue for the production and display of contemporary art, performances and project-oriented, experimental installation works. In Kinki Magazine, Travis explains the character of Appendix: "We're less interested in tangible end products of an artist than with having a dialog with him/her. That's why we invite our artists to spend three weeks with us, to exchange ideas with one another, to discuss and develop the work." Zachary sees Portland as a magnet and emerging platform for young art: "There's an energy here that deliberately breaks the established rules. We haven't experienced it in other cities in the US." According to Travis, it's also much easier to meet people here. "The people I know in New York tell me that it's extraordinarily difficult to make contacts there, because nobody has time. Everyone is constantly under stress, fighting for survival. In Portland it's not so hard, because it's cheaper here. We can manage, for instance, to rent an entire house and have enough space to expand into a studio and exhibition space." Appendix was deliberately conceived as a non-commercial space. The team finances it themselves. The Kinki Magazine article concludes: "In contrast to the 'American Dream', the Portland art scene shows a different face of the USA, far from megalomania and profit greed. The increasingly industrial-appearing art market in defiance is developing an avant-garde here who, as a consequence, can live out their ideas. That suggests that the saying 'Land of the free, home of the brave' has not quite lost its meaning yet." Zack and Travis think out of the box. Think different. I spent two amazing weeks at Appendix. 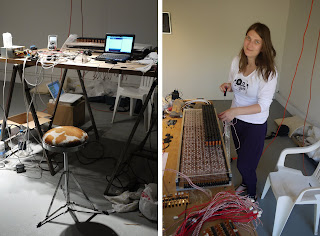 Zack prepared a short description of my work for the press release: "Distilling the essential powers claimed by various modes of creation —painting's living evidence of touch, or the power of the word to remake the past—Jahić creates for herself situations of enhanced mechanical advantage. At one time, the hand held the charred stick, and the stick touched the world. Here, embodied in elaborate engineering, and suspended at a theoretical distance by inanimate causal series, the basic interaction is elongated and radically transformed."[2]
The opening of the Passengers from the Absolute to the Relative show was electrifying. The place was packed! After I gave my Fire Painting performance, this time with two pixels only, two people from the audience were invited to try and orchestrate the machine's response for themselves. The first participant was terrified of fire. I ensured her the machine was perfectly safe, but that didn't help her overcome the nerves, or the phobia. Her hand, now wearing the glass data glove, was trembling in the air, timidly pointing at the apparatus. The fingers bent and flexed, stumbled uncontrollably, which translated into agitated, sudden jerks of fire explosions in front of the transparent plane. The audience stayed with her, encouraging in exclamation: "Come on, you can do it!" The following partaker was fundamentally different. He was good, as good or better than me, despite this being his first interaction with the machine. "It's like playing a piano, isn't it?" His reciprocal synergy with fire was gentle, sensitive and smooth, a getting-to-know-one-another relationship between the fiery image and himself. Rather than huge outbursting blasts, the skillful and explorative touch inspired numerous variations within flames, creating wisps of fire paintings that differed each time. I was impressed. The two actions came from two diverse types of interaction, resulting in two memorable performances. 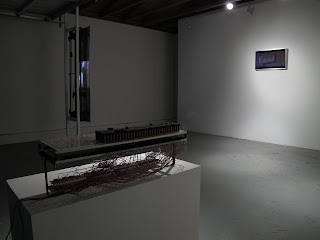 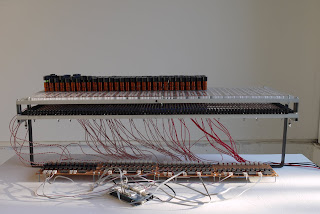 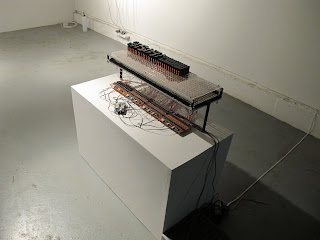 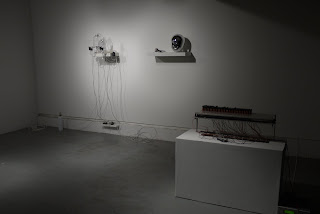 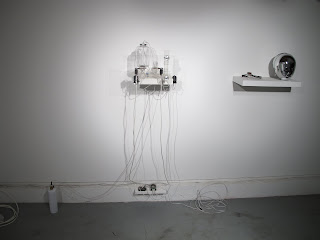 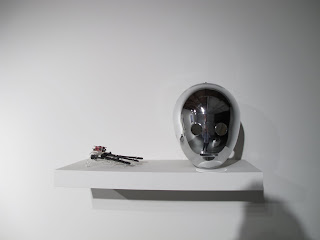 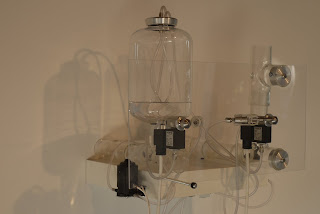 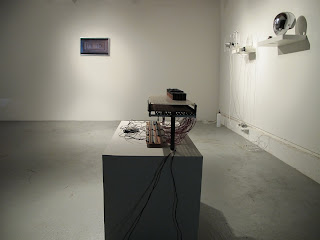 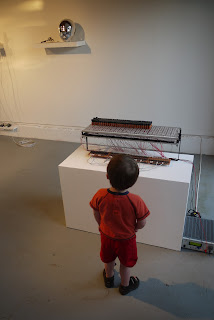 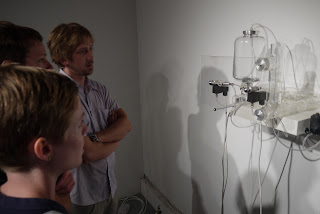 Portland is lovely in the summer. There's Cannon Beach nearby, where a lot of the ocean footage for the movie The Goonies was shot, vibrant music scene with Nice Nice, White Rainbow, Brainstorm, a Patrick Phillips classic that is the Potka and Snoop Dogg story, tacos and burritos, discussions on sci-fi and action superhero movies... The vibe here is open - people look at you, talk to you, and are incredibly friendly. A juxtaposition to the chilly vibe one can find in some too manicured parts of Europe. Thanks to the authors of the essays in my book and Manuel for a late night debugging session. Thanks to Travis and Zack for the opportunity and all their help. And thanks to David who encouraged and facilitated this visit and its working agenda in the first place, and my boyfriend, Andrej, for joining me on the ride.

Posted by Sanela Jahic at 10:52 AM No comments: