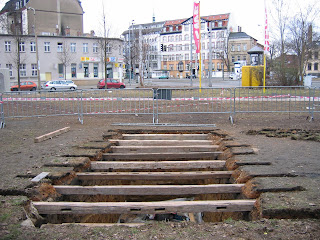 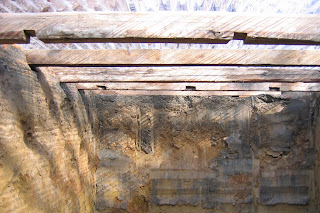 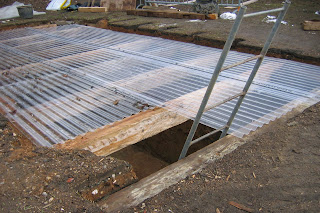 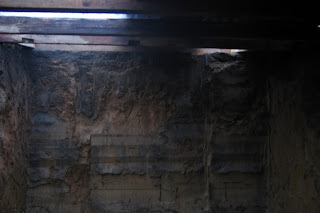 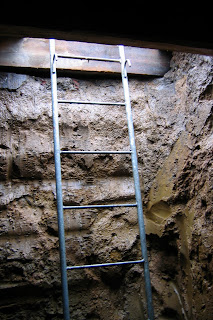 In the underground cell, located amid urban space at Connewitz Kreuz in Leipzig, a philosopher would talk about the apparent post-political, post-ideological today. In Leipzig, a city caught in specific post-positions itself, this underground disposition searched for "impossible thought". With political analysis, in terms of ideological critique, the invisible space would show potential of turning into an "underground political cell" for a moment. On Tuesday, 24th February, it thus planned to attain such existence with the discussion from Sami Khatib and Gene Ray for the audience of 10. Two days prior to the scheduled event, the cell caved in.
According to Mick O'Kelly (Ireland): Your siting of this discourse via a hole in the ground is a curious and provocative conext to have a debate. Where political and cultural collapse is visible all around us going underground creates a political interstice. These critical reflections are particularly relevant in the current political and economic collapse. To think »impractically« perhaps brings an urgency in creating a void to think differently about future options. The philosophical and political strategies employed are challenging in that in this in-between this liminal zone is the potential for active and passive nihilism. Philosophically the hole/void holds the possibility of promise of a future to be filled with thought. The hole might perform as a controlled environment or release indeterminacy. The thought might pursue a manifesto or schizoanalysis.

I am currently continuing post-graduate studies in MFA Public Art and New Artistic Strategies at the Bauhaus University in Weimar, Germany. The winter semester focused on exploring the relationship between art, architecture and urban space with advisement of the Guest Professor Mick O’Kelly. The location of the semester's project was Leipzig, a city northeast of Weimar. Leipzig is tied up in particular post-socialist, post-industrial position.
Posted by Sanela Jahic at 12:42 AM 1 comment: 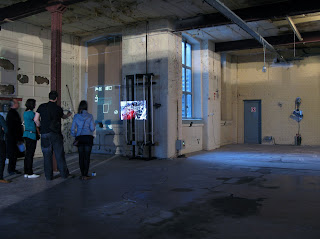 This photo was taken at the exhibition Quoting Contemporariness in Universal Cube, Halle 14, Spinnerei Leipzig.

Scanner and Pendulum are ideological mechanisms. I took the term »ideological mechanism« word for word, literally, and made an apparatus that produces an illusion with a dematerialized image, reduced to a light field. Machines that fabricate phantasms or fictions are unmasked.

The images shown by the two machines are »literal« as well. They are based on two stories written about mechanisms, one from Edgar Allan Poe (The Pit and the Pendulum, 1842) and the other from Franz Kafka (The Penal Colony, 1914). Pendulum constructs a photograph of harrow as a symbol of ideological apparatus that, as in Kafka's story, writes Laws into an individual's body and his subjectiveness. Our identity is always constructed. Scanner imprints the image of a pit (Poe), a black hole with roots.
In contrast to historical references – in a way Pendulum is like Duchamp's Rotorelief made with LED diodes – and kinetic art from the beginning and the mid-20th century, my machines show realistic images. However, because of the nature of LED diodes, which do not provide detailed clarity, the images also become abstract again. My kinetic objects thus produce and devour images at the same time.
Posted by Sanela Jahic at 11:25 AM No comments: