Just to warn: The two movies do not show the reality of image and movement, because the camera processing is not compatible with the speed of RGB LED pulsation. In contrast, the photos below are accurate.
Posted by Sanela Jahic at 2:56 AM No comments: 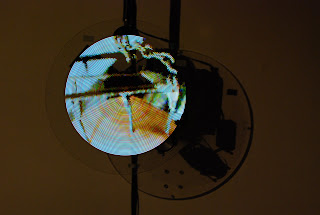 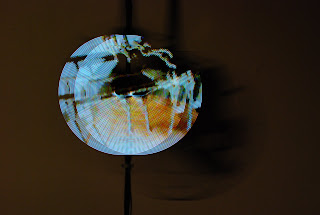 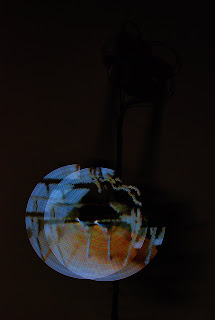 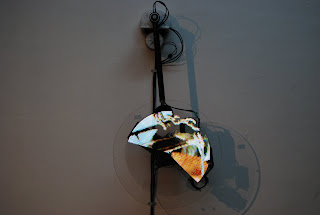 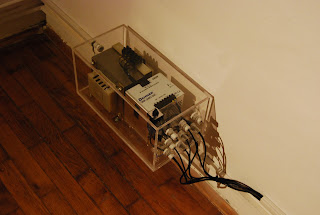 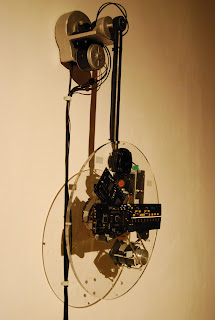 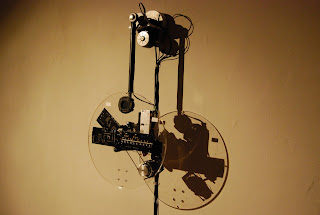 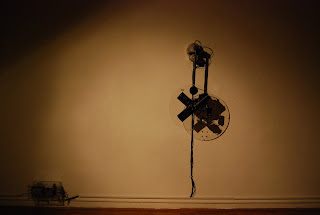 These photos were also taken in the P74 gallery in Ljubljana, during my solo exhibition Scanner and Pendulum.

I named my fourth larger kinetic object Pendulum, 2007-2008. This machine again uses the POV's ability of producing an almost holographic illusion. It shows a photo of drags writing in the subject's body. Kafka wrote of an old institutions' apparatus in his The Penal Colony (In der Strafkolonie, October 1914).

A Slovenian company in Tržič developed the software and electronic part for the object, based on POV during the years 2006-2007.
Posted by Sanela Jahic at 3:07 PM No comments:

Posted by Sanela Jahic at 2:32 PM No comments: 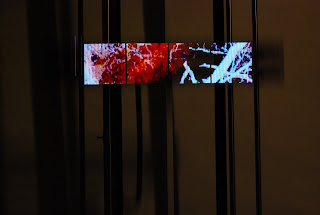 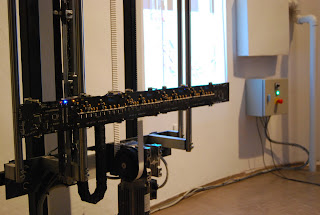 These are the more detailed views of Scanner, when it was exhibited together with Pendulum in the Centre amd Gallery P74 in Ljubljana from April 15-May 8, 2008.
Posted by Sanela Jahic at 2:26 PM 3 comments:

Scanner contains four images. Three of them represent a hole, each from a slightly different perspective to give an efect of rotation and absorption of its viewer (subject). Scanning ends with a photo of wreath made out of roots.
Posted by Sanela Jahic at 1:58 PM No comments:

The third so called scanner machine I developed in collaboration with three Slovenian companies.

This latest scanner, 2005-2008, is a larger, more massive and monstrous variant of the first two types. Its scale is well grounded. The former motor for car wipers was replaced by a powerful industrial motor that offers programed and variable motion. Here I wanted to get rid of a surface with projection. The screen and neon light that moves linearly upwards and downwards and illuminates and exposes an image (like in the previous two scanners) are gone and replaced by RGB LED diodes and POV.

Therefore this sistem is a one axis, linear motion, full RGB collor POV. You can upload any kind of image into its flash drive to be shown in resolution of 212 x 212 pixles. Its asinhronos electric motor drive is controled by a frequecy regulator and its RGB LED line achives speed of 4 m/s. It needed to be 13 times faster to see the whole image floating in midair. I used arduino and some code in linux to control a digital camera that has a shutter time of 0.8 s to fully capture the whole image and later on show it on a projector.

When the machine stops the image disappears, evaporates, like a fabrication of fiction or an incarnation of emptiness. An empty point of identification is established: when somebody detaches him/herself from the role assigned to them, they can assume or occupy an empty position (eg jump into void, a hole or "to be in-between position"). A rupture emerges, a tearing with rigid structures and bonds of identity, like that of paternal authority, religious tenet, disciplinary regimes of family or nationalism.
The birthplace of subject is thus of key importance here. So I dug out a black hole and roots were found.

Posted by Sanela Jahic at 1:54 PM No comments: